Manchester City brushed off a series of coronavirus-related absences to outclass Chelsea 3-1 at Stamford Bridge on Sunday and reassert their Premier League title challenge.

Pep Guardiola’s men had scored more than twice in a league game just once since their opening match of the season, but were 3-0 up by half-time thanks to goals from Ilkay Gundogan, Phil Foden and Kevin De Bruyne.

Victory lifts City to within four points of Liverpool and Manchester United at the top of the table, but with a game in hand on both to come.

Chelsea were expected to challenge for the title themselves after a £220 million ($300 million) spending spree in the transfer market, but a run of one win in six games has left them down in eighth, seven points off the pace having played a game more than the leaders.

Roman Abramovich has dismissed plenty of Chelsea managers in the past for similar spells of form and the pressure in mounting on Frank Lampard to prove he can mould a talented squad of individuals into a team capable of competing with the standards set by Liverpool and City in recent seasons.

City were without Ederson, Kyle Walker, Ferran Torres and Gabriel Jesus due to a coronavirus outbreak that led to their clash at Everton on Monday being postponed.

The visitors were unable to fill their bench due to a depleted squad, but Benjamin Mendy was named as a substitute despite City launching an investigation into his breach of coronavirus restrictions by hosting a New Year’s Eve party.

Goalkeeper Zack Steffen was handed his Premier League debut, but was barely tested despite Lampard being able to start £150 million trio Christian Pulisic, Timo Werner and Hakim Ziyech together in attack for the first time.

City took 10 minutes to find their feet in an unfamiliar formation with De Bruyne the most advanced forward in between Foden and Raheem Sterling.

But once Guardiola’s men found their rhythm, they cut Chelsea apart with an ease that will cause Lampard concern.

Gundogan opened the floodgates on 18 minutes when he spun just outside the area and found the bottom corner.

Guardiola had only won once in five previous visits to Stamford Bridge as Barcelona and City boss, but his side were cruising inside 35 minutes.

All 10 Chelsea outfield players were caught ahead of the ball as De Bruyne released Sterling to run through on goal from inside his own half and after the England international hit the post, De Bruyne was first to react and slot home the rebound.

The scoreline could have been far more embarrassing for the Blues had City been more ruthless in the final hour.

Foden looped a header over when unmarked at the back post before Gundogan flicked another glorious chance wide before the break.

City continued to keep the hosts chasing shadows in the second-half as Edouard Mendy tipped over Rodrigo’s header, while De Bruyne fired wide from the edge of the area.

It is at the other end of the field City had sustained a title challenge while waiting for their forwards to find form, but they just failed to record a ninth clean sheet in 11 games as Callum Hudson-Odoi slid in at the back post to claim a Chelsea consolation in stoppage time. 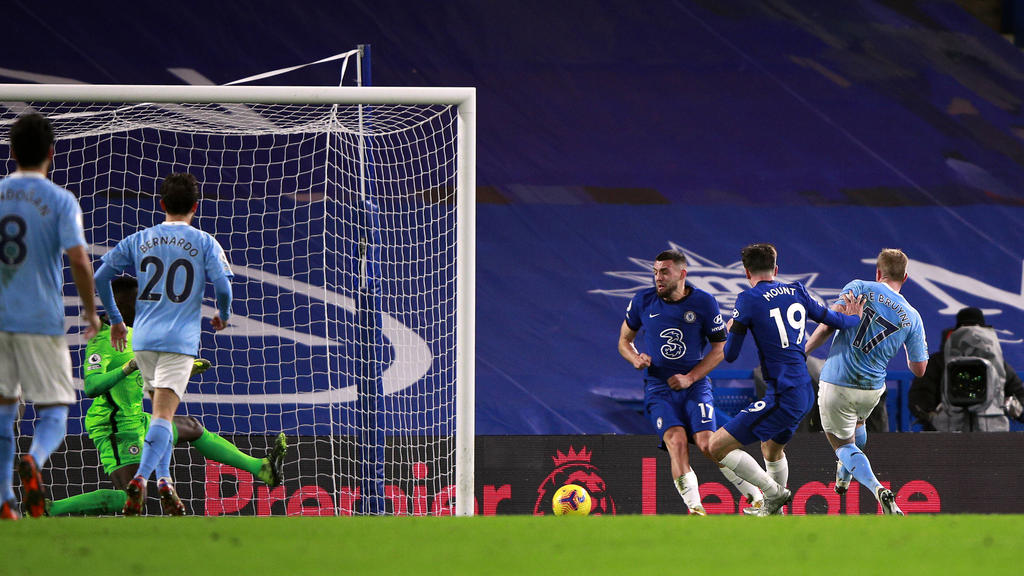