Mason Mount preserved Thomas Tuchel’s unbeaten record as the Chelsea midfielder equalised from the penalty spot to earn a 1-1 draw at Southampton on Saturday.

Tuchel’s side trailed to a first half goal from Japan star Takumi Minamino at St Mary’s.

Mount came to the rescue as he won and converted the second half spot-kick that extended Tuchel’s unbeaten run to seven matches in all competitions since he replaced the sacked Frank Lampard in January.

Chelsea remain fourth in the Premier League after their run of five successive wins came to an end.

They will fall out of the top four if West Ham beat Tottenham on Sunday.

In a performance reminiscent of the issues that plagued Lampard, Chelsea monopolised possession without delivering the knockout blow and paid for a defensive lapse.

After losing six consecutive league matches for the first time in their history, even a scrappy point was a welcome boost for Southampton.

N’Golo Kante, Edouard Mendy, Kurt Zouma and Reece James had come back into the Chelsea team as Tuchel made four changes from Monday’s win against Newcastle.

James has had less opportunities under Tuchel than he did with Lampard and the England defender made a bid to catch Tuchel’s eye with a fine cross to Marcos Alonso, whose volley flashed just wide.

Holding over 70 percent of the possession, Chelsea controlled the first half tempo, but lacked the cutting edge to turn that territorial dominance into a tangible reward.

Tammy Abraham and Timo Werner struggled to make an impact up front, with the German sparking an angry outburst from Tuchel when he opted to pass instead of taking a shot.

By the time Antonio Rudiger tried his luck with a long-range drive that was too close to Southampton keeper Alex McCarthy, Chelsea were beginning to run out of ideas.

The Blues had conceded just one goal in the six games, but Southampton sliced them open with a rapier thrust in the 33rd minute.

With the centre-backs caught out of position, on-loan Liverpool forward Minamino scampered clear and cleverly dummied Mendy and Azpilicueta before flicking a cool finish past the Chelsea keeper.

Falling behind to Southampton’s first shot of the match was bitter blow.

It was the first time Chelsea had trailed in the Tuchel era and they threatened an immediate equaliser when Zouma’s header from Alonso’s free-kick was pushed away by McCarthy.

As their frustration mounted, Chelsea were lucky to finish the half with 11 men after Werner and Kante both escaped without punishment following VAR reviews of ugly late tackles on Moussa Djenepo.

Hampered by an ankle injury, Abraham was replaced by Callum Hudson-Odoi at half-time.

Abraham’s exit put more onus on Werner, who had scored his first league goal in 14 games and 1,000 minutes when he netted against Newcastle.

Werner was lively enough, firing into the side-netting from a tight angle, but it was an incisive break from Mount that led to Chelsea’s 54th minute equaliser.

Mount’s burst into the Southampton area prompted a rash lunge from Danny Ings and he picked himself up to convert the penalty for his fifth club goal of the season.

Jan Vestergaard was inches away from restoring Southampton’s lead when his header from Djenepo’s cross beat Mendy and cannoned back off the bar.

Hudson-Odoi’s brief substitute appearance ended in embarrassment when he was hauled off to make way for Hakim Ziyech.

James could have won it for Chelsea in the closing minutes but he side-footed over from Mount’s pass. 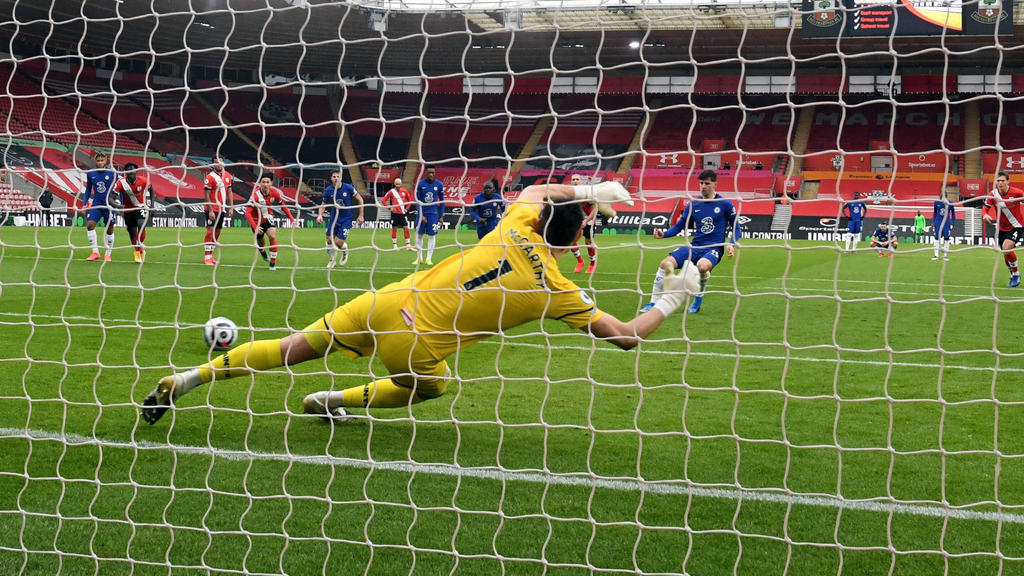